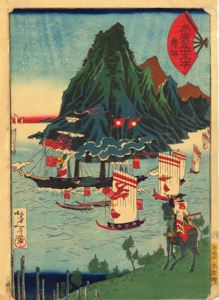 Commentary
Adopted by a dear uncle who practiced art as a hobby, Yoshitoshi was first exposed to art at a relatively young age. In fact, his uncle served as his first teacher. At the age of eleven, Yoshitoshi enrolled in the Utagawa school to study standard ukiyo-e genres and western techniques of perspective, light, and shadow under Kuniyoshi. When Yoshitoshi published his first signed print at fourteen in 1853, black gunboats led by Commodore Matthew Perry arrived in Japan to establish trade between the United States and Japan the same year. Paired with high inflation, recession, and crop failures, this event assisted in bringing about Japanâs transition into the Meiji Period, which shook Japan politically and socially. Inevitably, this transition shaped Yoshitoshiâs art. Marked by instability, uncertainty, and violence, the transition into the emperorâs Meiji period resulted in sentiments of vulnerability and distrust of the government. Fear of colonization at the hands of westerners constructed government policy that disposed of Japanese tradition and incorporated modern western technology and institutions in an attempt to strengthen Japan. Japanâs struggle in adjusting to the modern world influenced Yoshitoshiâs innovative and unique depictions of historical Japanese subject matter. Like many other ukiyo-e artists, Yoshitoshi printed his own series of the famed Tokaido Road soon before the beginning of the Meiji period. From his Fifty-three Stations of the Tokaido, Yoshitoshiâs âStation 31, Maisakaâ depicts the beginning of Japanâs modernization by updating a familiar landscape by Hiroshige. With its depiction of the Imagiri Promontory, Yoshitoshiâs print is similar to Hiroshigeâs print in terms of subject matter. However, several modern touches differentiate Yoshitoshiâs from Hiroshigeâs. While Yoshitoshi has turned one of the boats into a paddlewheel steamship as black as Commodore Perryâs black ships, the shipâs red and white decorative elements and crests denote it as distinctly Japanese. In addition, the ship travels in the same direction as the smaller, more traditional surrounding Japanese boats and matches their decorations. Representative of Japanâs attempt to strengthen itself in face of foreign threat, the steamship was used in Japanâs effort to keep afloat and active in the worldâs economy and trade. Steamships were also mechanized for war preparations, emphasized by Yoshitoshiâs addition of a samurai on the right of the foreground. Once considered to be the most effective units of warfare in Japanese culture, the samurai on horseback looks on to warfareâs future. With its coloration and westernization, Yoshitoshiâs style further differentiates itself from Yoshitoshiâs and further characterizes Japanâs cultural struggle at the time. Yoshitoshiâs more intense colors reflected the growing accessibility of chemical pigments, specifically the printâs red, green, and purple, from the West due to trade expansion. Contrasting the placidity of Hiroshigeâs print, the color intensity also signifies Japanâs stress during its transition into the Meiji period. Yoshitoshiâs omission of Hiroshigeâs gentle bokashi and addition of western waves upon the water adds to the tension of the print. While Yoshitoshiâs composition is similar to Hiroshigeâs composition in its depiction of the Imagiri Promontory in the background with boats below on the water, Yoshitoshiâs Promontory appears more larger and more centered, giving the print more western attributes. Isabella Ramos, Scripps College 2017
Marks
On mat, in pencil: Marer 374. Description on verso of mat. Signed: Yoshitoshi hitsu. Carver: Hori Take. Censor's seal: Aratame and date (Uruu-go) on single seal.
Medium
Colored ink woodblock on paper.
Object Description
Edo period Japanese color woodblock print with an image of ships on the sea. In a vertical composition, Yoshitoshi updates the horizontal print by Hiroshige. A paddlewheel steamship plows through the waters at Maisaka as a traditional samurai views the future of warfare from astride his horse. Even the colors are more intense, reflecting the use of imported pigments in Japanese woodblock prints to make them seem more modern. The artist Yoshitoshi was quick to capitalize on the changes taking place in Meiji Japan and provided a number of images that juxtaposed the old and new.
Publisher
Kiya Sojiro.
Keywords Click a term to view the records with the same keyword
This object has the following keywords:
1841-1868, Tokaido Road, Japan
Portfolio List Click a portfolio name to view all the objects in that portfolio
This object is a member of the following portfolios:

Your current search criteria is: Objects is "Fifty-three Stations of the Tokaido: Station 31, Maisaka".