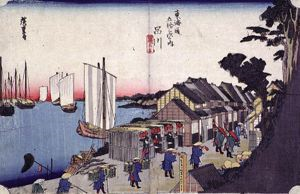 Shinagawa was the first station on the Tokaido for westbound travelers from Edo and the last stop for people coming from Kyoto. Â This print depicts what would have been a common sight on the Tokaido, a daimyo procession - all clad in smart blue costumes with the customary two swords - performing the obligatory trek from their domains to the shogun's capital. Â They move stiffly through the early morning, as rosy streaks of dawn break in the sky. Â Although Katsushika Hokusai had also treated the subject of early morning departures, no print artist could surpass Hiroshige's capacity for lyricism. Â His skill is seen especially in the expressive poses of the diminutive figures, from the boldly coquettish teahouse waitress standing by the lanterns left of the procession to the rather shy white-clad figure barely visible in the doorway of the second inn from the left. Â The anonymous artisan who inked the blocks brilliantly captured the appearance of a dawn sky. Â The great ships at sea remind us that the name Shinagawa means "Goods River" - products from all over the land entered Edo there. Â Also famous for its cherry blossoms, Shinagawa thrived as a place for people to see friends off on their westward journey from Edo.

Your current search criteria is: Objects is "Fifty-three Stations of the Tokaido: Station 2, Shinagawa".