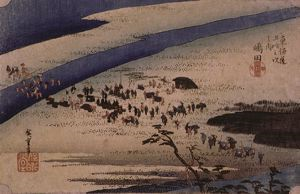 Marks
On mat in pencil: Jo XVII set 24, n.321. Censor's seal: Kiwame.
Medium
Nishiki-e, horizontal oban; colored ink on paper.
Object Description
Color woodblock print from Hiroshige's Tokaido Road series. The Oi River, which rises in the Shirane Mountains, flows between the towns of Shimada on the east bank and Kanaya on the west bank, and empties into the Gulf of Suruga, Hiroshige depicts the river from a bird's-eye view; a daimyo's retinue awaits its turn to cross.

While in dry weather the Oi was nothing but a shallow stream, when it rained heavily, like most rivers in Japan it rapidly changed into a raging flood. No one could cross it then, and as a result, both Shimada and Kanaya would be crowded with travelers stranded, sometimes for days, until the river again became passable. They could only wait. There was a famous saying, "Eight ri (19 miles) of the Hakone Pass can be crossed on horseback - but how to cross the Oi River?" In the Edo period, in accordance with the shogunate's strategy for preserving the safety of the capital, construction of bridges over large rivers was not permitted. These unbridged rivers thus remained formidable impediments to moving hostile troops rapidly, making it difficult for enemy forces to attack the capital by surprise.

In places where the river was safe to cross, coolies were available for hire, to carry travelers in palanquins, on a platform, or piggyback. There were fixed rates for these different means of transport, and the level of the water was calculated in the price, which increased according to whether it was up to the knees, waist, chest, or shoulders.

The river, in broad stripes of blue, is beautifully accentuated with bokashi (gradation).

Your current search criteria is: Objects is "Fifty-three Stations of the Tokaido: Station 24, Shimada".