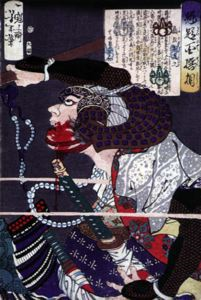 Commentary
This image is published in "Beauty and Violence" fig. 22.5, p. 109, mono.
Marks
On mat, in pencil: Marer 458. Japanese text printed in the upper right area of the image. Signed: Ikkaisai Yoshitoshi hitsu. Censor's seal: Aratame and date (Tatsu-hachi) on single seal.
Medium
Colored ink woodblock on paper; oban.
Object Description
Meiji period Japanese color woodblock print with an image of a warrior. Shima Sakon Tomoyuki was once one of the principal kerai ('vassals') of Tsutsui Junkei (1549-84), later became a retainer of Ishida no Mitsunari (1560-1600), the most important figure on Toyotomi Hideyori's staff who fought against Tokugawa Ieyasu in the battle of Sekigahara in 1600. Here, Tomoyuki is hit by bullets in the battle of Sekigahara, his Buddhist rosary swinging in the air. The parallel to the gun battle for Ueno in 1868 would have been obvious, but not illegal.
Publisher
Ohashi (Daikyodo).
Keywords Click a term to view the records with the same keyword
This object has the following keywords:
1841-1868, Soldiers and Warriors
Additional Images Click an image to view a larger version

Your current search criteria is: Objects is "Shima sakon Tomoyuki is Hit by Bullets in the Battle of Sekigahara".