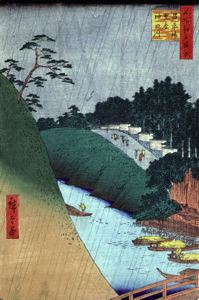 The viewpoint is the Shohei Bridge of the title, of which a slice appears in the lower right; to reach this point, we will have passed through the broad plaza depicted in plate 9. Â Beyond, we look through the gorge of the Kanda River, with exquisitely shaded green banks rising high on either side. Â These banks were not so dramatic in reality, but Hiroshige's picturesque exaggeration reminds us that this is not a natural river but rather a channel laboriously carved through Kanda Mountain in the 1610s as a way of diverting the flood-prone Hira River, (which survives in part as the Nihonbashi River).

The Seido of the title is the Sage's Hall, a shrine dedicated to Confucius and testimony to the Tokugawa shogunate's efforts to promote Confucianism as an orthodox creed of the state. Â Here we see only the outer walls of the compound where the shrine and its affiliated Confucian college were located. Â They rise in staggered array along the slope known as Shoheizaka, which takes its name after Changping in the state of Lu, where Confucius was born more than five centuries before Christ. Â The shrine survives today as a traditionalist center of Chinese culture. Â The site of the college, at the crest of the hill to the left, has been occupied by a variety of educational institutions in modern times; today, it is the home of Tokyo Medical and Dental University.

This is the first of three evocative depictions of rain in this series, all assigned to the "Summer" group. Each is a distinctively different kind of rain. Â Here we see the steady slanting sort of rain typical of the June baiu ("plum rain," after the fruit that appears then), a pleasant season of dull skies and rich greens that Hiroshige has captured perfectly. Â In the river below, boatmen from the lumberyards of Yushima Yokocho, protected by straw raincapes, pole their cargo while the people on the slope and the birds in the sky all seem at ease in the warm summer shower.


Publisher
Uoei (Uo-ya Eikichi).
Keywords Click a term to view the records with the same keyword
This object has the following keywords:
1841-1868, Cities, Views of Edo, Japan
Portfolio List Click a portfolio name to view all the objects in that portfolio
This object is a member of the following portfolios:

Your current search criteria is: Objects is "Seido Shrine and Kanda River from Shohei Bridge".