Sadanobu Threatening a Demon in the Palace at Night 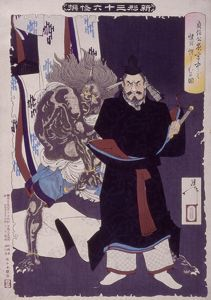 Commentary
Note: I (p.20-21) of "Yoshitoshi's Thirty-six Ghosts." Sadanobu defends the palace: Â The 10th century courtier Fujiwara Tadahira, also called Sadanobu, was on his way to Emperor Suzaku's chambers when a demon grabbed the end of his sword. Â Sadanobu stood firm, and the creature scurried away. This image is the same as 93.3.35.
Marks
On mat, in pencil: Marer 438, exhib. 11/93, Thirty-six Ghost Stories. Description on verso of mat. Artist's seal: Taiso. Signed: Yoshitoshi.
Medium
Colored ink woodblock on paper; oban.
Object Description
Sadanobu was a prominent Heian nobleman; he is more commonly known as Fujiwara no Tadahira. From the seventh to the eleventh centuries the Fujiwara were the most powerful family in Japan, self-confident and assured of their political pre-eminencee. The empress and most of the chief officials at the Heian court were chosen from the ranks sof the Fujiwara clan. Tadahira served the emperor for forty years during the first half of the tenth century and was considered a decisive and able minister.


Publisher
Sasaki Toyokichi.
Keywords Click a term to view the records with the same keyword
This object has the following keywords:
1886-1890, Demons, Soldiers and Warriors
Additional Images Click an image to view a larger version

Your current search criteria is: Objects is "Sadanobu Threatening a Demon in the Palace at Night".