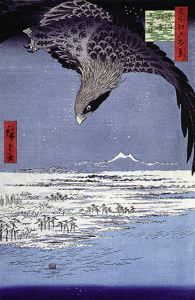 It is perhaps superfluous to ask what a mountain bird like the golden eagle is doing here at the edge of Edo Bay; Hiroshige, after all, was not a naturalist. Â This kind of displacement does raise the possibility, however, that some sort of symbolism is intended by the eagle, which happens to be the deity worshipped at Washi Daimyojin Shrine, site of the popular Torinomachi Festival. This connection, whether intended by Hiroshige or not, is certainly plausible: the Torinomachi Festival occurred in the winter and was linked with prayers for a prosperous new year, a theme that connects Fukagawa Susaki as well. Washi Daimyojin, the eagle god, was also connected with the Bodhisattva Myoken, deification of the Big Dipper, which is perhaps suggested in this northward view.


Publisher
Uoei seal (Uo-ya Eikichi).
Related Objects
Same as 54.1.44, except color.
Keywords Click a term to view the records with the same keyword
This object has the following keywords:
1841-1868, Views of Edo, Japan
Portfolio List Click a portfolio name to view all the objects in that portfolio
This object is a member of the following portfolios:

Your current search criteria is: Objects is "One Hundred Famous Views of Edo: 107, Plain at Susaki, Fukagawa, 100,000 tsubo".