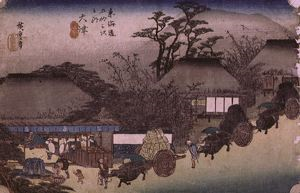 Commentary
Same image as 54.1.3, but there are some changes (a mountain has been added to this image, and there is more color).
Edition
Rare and early edition.
Marks
On paper backing, in pencil: Johnson collection XX set 54, #28, rare and early edition. Signed: Hiroshige ga.
Medium
Nishiki-e, horizontal oban; colored ink on paper.
Object Description
Color woodblock print with a village scene with men who have ox-pulled carts filled with loads going down a road.