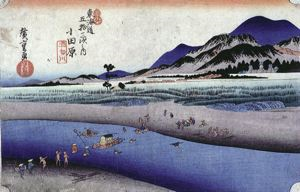 Commentary
Later version; changes in the moutain range. Same image as 46.1.50 and 54.1.23 except the mountain shapes differs and there is an addition of grey color.
Edition
Later version; changes in the moutain range.
Marks
On verso in pencil, lower right: Jo XV 10-3. On mat in pencil: Jo XV 10-3, 46.1.55, Hiroshige. Signed: Hiroshige ga.
Medium
Nishiki-e, horizontal oban; colored ink on paper.
Object Description
Odawara, a town connecting to Hakone Pass, is seen from the Sakawa River. The settlement had developed as the castle town of a lord of the Muromachi period (1392-1573), Hojo Soun (1432-1519), and kept on prospering as the castle town of Lord Okubo, who had ruled the district since 1590. The Nikawa River cuts diagonally through the foreground. Beyond the far bank, characteristically reinforced with long bamboo tubes filled with gravel, and across the marshy lands that extend to the foothills, appear the castle and the town's houses. The Hakone Mountains are rendered in a stacatto manner, with patches of light and dark colors. Travelers are being carried across the shallow water of the Nikawa River in a palanquin on a platform carried by many bearers, or individually, on the shoulders of numerous men.