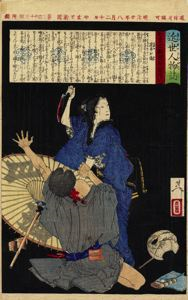 Marks
Japanese text across the top edge and in a box in the upper part of the image. On mat, in pencil: MI32, "Man Killing Man," exhib. "Yoshitoshi" 11-12/86, Montgomery. Artist's seal: Taiso. Signed: Yoshitoshi.
Medium
Colored ink woodblock print on paper; oban.
Object Description
Meiji period color woodblock print. Hanai Oume, who formerly had been a geisha under other names, was the owner of the Suigetsu restaurant in Tokyo. The night of June 9, 1887, she killed a man named Kamekichi on the banks of the Sumida River and afterward was arrested and charged with murder. Oume pled in court that she had been refusing Kamekichi's advances for some time, that he had attacked her in the dark with a knife, and that she had killed him in self-defense. The prosecution charged that the couple had been violent lovers, that Oume was a woman with a violent temperament, that Kamekichi had become increasingly parasitic, and that she had premeditated the murder. Oume was sentenced by the court to life imprisonment. The trial made her a celebrity, and a play and a novel were written about her. She was paroled from prison in 1903 and from that time supported herself through public recitations of her story. Yoshitoshi's print was published about two months after the murder as the eleventh in a series of twenty pictures of contemporary figures, issued as supplements by the Yamato Newspaper. This was Yoshitoshi's last set of ânewspaper printsâ [...]. The text at the top of the print presents a brief biography of Oume and a resume of the two theories of her guilt, concluding that one way or another, âshe was certainly an extraordinary woman.â Details in the figure's presentation show that Yoshitoshi was clearly convinced that the murder was in self-defense. Oume could neither have concealed nor held a knife before the meeting: she has dropped from her hands the umbrella and the lantern bearing the name of her restaurant, and a folded piece of cloth has fallen from the only place she could conceal a weapon, the pocket formed by the overlap of her robe across her chest. Also, the lantern is slashed indicating that she held it up to protect herself. How she tore the knife from her assailant the artist left us to guess, but he obviously sympathized with her cool determination to finish of the hapless Kamekichi once and for all rather than risk a later attack.
(Ref. Keyes, Roger, and George Kuwayama. "The Bizarre Imagery of Yoshitoshi: The Herbert R. Cole Collection," p.76)

Publisher
The Yamato Newspaper Company.
Keywords Click a term to view the records with the same keyword
This object has the following keywords:
1886-1890, Death
Portfolio List Click a portfolio name to view all the objects in that portfolio
This object is a member of the following portfolios: