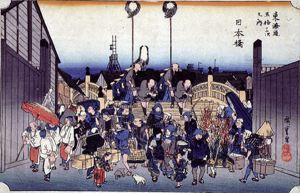 Commentary
Same image as 54.1.2, but later state and in better condition.
Edition
Later state.
Marks
On verso in pencil, lower right: Jo XIV 1a. On mat in pencil: XIV 1a #1, Nihonbashi Station 1, Morning Scene, Hiroshige, 46.1.64. Signed: Hiroshige ga.
Medium
Nishiki-e, horizontal oban; colored ink on paper.
Object Description
Color woodblock print from Hiroshige's Tokaido Road series. In 1602 the Tokaugawa shogunate erected this arched wooden bridge to span the Nihonbashi River, one of the many small tributaries that empty into the Sumida River. The district around this bridge became one of the most vital commecial and transportation centers in Edo. Stores, wholesalers, storage buildings, fish markets and houses lined the riverbanks, to which commercial goods were transported by boats. Two major highways - the Tokaido Road on the Pacific Ocean side, and the Kiso Road that traversed rugged mountainous regions - converged and diverged here, connecting Edo and Kyoto.