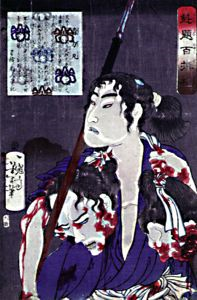 Commentary
Description on verso of mat.
Marks
On mat, in pencil: Marer 344. Description on verso of mat. Japanese text printed in the upper left of the image. Signed: Ikkaisai Yoshitoshi hitsu. Censor's seal: Aratame and date (Tatsu-shichi) on single seal.
Medium
Colored ink woodblock on paper; oban.
Object Description
Edo period Japanese color woodblock print with an image of a warrior with a bloody spear and a severed head slung over his shoulder. On May 15, 1868 two thousand troops loyal to the shogunate fought a desperate battle at Ueno, in Edo, near the tombs of some of the Tokugawa shoguns. The last Tokugawa shogun, Yoshinobu (1837-1913), had in fact already surrendered his office to the new government and the shogitai ('the clear and righteous brigade') knew they were fighting a losing battle. The Imperial attack began at 10 am and was over before the evening; the loyalist troops were massacred.

Yoshitoshi and his apprentice, Toshikage, witnessed this battle, and their observations resulted in his "Selection of One Hundred Warriors." Because it was unauthorized to accurately document the battle, Yoshitoshi chose to depict historical characters from the various civil wars before the Tokugawa shogunate came to power. This series especially shows his fascination with the bravery and self-sacrifice of the warriors and his response to the carnage that took place at Ueno. This print shows medieval warrior Mori Rikimaru with his spear and two severed heads around his neck like medals.


Publisher
Ohashi (Daikyodo).
Keywords Click a term to view the records with the same keyword
This object has the following keywords:
1841-1868, Soldiers and Warriors
Additional Images Click an image to view a larger version

Your current search criteria is: Objects is "Mori Rikimaru with Spear and Severed Heads".