One Hundred Aspects of the Moon: No. 42, Moon of the Enemy's Lair, Prince Usu 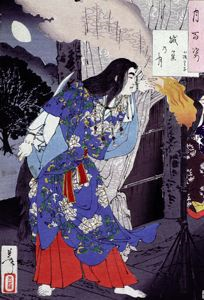 Commentary
Prince Usu in Disguise: Â O-Usu No Mikoto (81-113) was a legendary Prince whose exploits won him the title Yamato Takeru (bravest in Yamato, the heartland of Japan). Â In order to conquer the island of Kyushu, he disguised himself in his aunt's clothes to steal into a banquet where the enemy was celebrating. Â With sword behind him, Prince Usu is about to join the feast where he killed the drunken warriors.
Marks
On mat, in pencil: Marer 240. Artist's seal: Taiso. Description on verso of mat. Signed: Yoshitoshi. Carver: Yamamoto to.
Medium
Colored ink woodblock on paper; oban.
Object Description
Meiji period Japanese color woodblock print with an image of O-Usu no miko (Little Prince Usu) holding a sword behind his back, pulling back a curtain, and readying to strike the inhabitants inside.

The fierce third son of Emperor Keiko, O-Usu was sent to Kyushu to crush a rebellion of the aboriginal Kumaso. Dressed as a woman, O-Usu was invited to the table of of the two Kumaso chieftans; when they were intoxicated with drink, O-Usu killed the elder brother and fatally wounded the younger.

"Here the determined young man, sword hidden behind his back, joins the rebel's feast, smiling at his ruse. By the way the figure moves towards the right, the composition invites us to imagine the scene behind the curtain. Yoshitoshi's audience would have contrasted the refinement of O-Usu's appearance with the drunken feasting that they would have visualized in the hall."


Publisher
Akiyama Buemon.
Keywords Click a term to view the records with the same keyword
This object has the following keywords:
1886-1890, Royalty and Rulers
Portfolio List Click a portfolio name to view all the objects in that portfolio
This object is a member of the following portfolios:

Your current search criteria is: Objects is "One Hundred Aspects of the Moon: No. 42, Moon of the Enemy's Lair, Prince Usu".