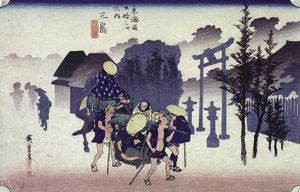 Commentary
This image from Hiroshige's Fifty-three Stations of the TÅkaidÅ series of prints shows a group of travelers in front of the Mishima Taisha (Great Shrine). A major shrine in Izu Province (modern Shizuoka Prefecture), Mishima became popular over the centuries with warriors who prayed to its deity for victory in battle. In this print, Hiroshige depicts travelers setting out in the early morning mist after staying at one of the local inns. Only the travelers and the trees in the foreground are rendered with black outlines. The rest of the elements in the scene, including the shrine gate, lanterns, figures and trees behind them are printed with blue and grayish-brown color blocks to suggest an eerie otherworldliness around the shrine.


Marks
On mat in pencil: Jo XVI set 12, Hiroshige, Mishima Station 12, Morning Mist, 46.1.56. Signed: Hiroshige ga. Censor's seal: Kiwame.
Medium
Nishiki-e, horizonal oban; colored ink on paper.
Object Description
After the rugged and harsh Hakone Pass, travelers arrived at the relatively level terrain of Mishima. Using the famous shrine at Mishima as a key feature, Hiroshige depicts travelers departing in the mist of early morning. The bearers carrying a man in a palanquin; a mounted man wearing a raincoat and a straw hat is led by a groom, who is wrapped in a straw mat. They are in turn led by a luggage carrier. Their huddled postures indicate the shiveringly cold morning air. As this compact group passes before the shrine, three figures walk away in the opposite direction, the definition of their forms obscured by the heavy mist.

The blue and gray silhouettes of houses, a grove, and the shrine and its torii gate enhance the chilly, melancholic, and silent mood of the morning. This print is one of the designs that establishes Hiroshige's fame as one of Japan's finest lyrical artists.

The shrine at Mishima is historically important. It was here in 1180 that Minamoto no Yoritomo (1147-1199) vowed to defeat his political enemies, the Taira family. He eventually succeeded in his campaigns, set up the military government (bakufu) in Kamakura, and became the first shogun.

Ref. "Hokusai and Hiroshige," p.174.
Publisher
Hoeido (Takenouchi Magohachi) seal.
Keywords Click a term to view the records with the same keyword
This object has the following keywords:
Hiroshige's Tokaido (c. 1833-1834), Tokaido Road, Japan
Portfolio List Click a portfolio name to view all the objects in that portfolio
This object is a member of the following portfolios:

Your current search criteria is: Objects is "Fifty-three Stations of the Tokaido: Station 12, Mishima".