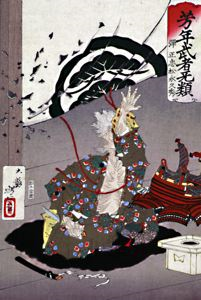 Your current search criteria is: Objects is "Matsunaga Hisahide Before Committing Suicide".