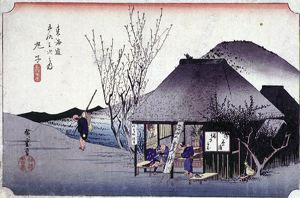 One of the prominent aspects of Edo-period travel was the opportunity to sample the country's astonishing diversity of local products. Â Nearly every region had its distinctive specialty or "famous product" (meibutsu). Mariko's specialty, tororojiru, is usually translated as "yam soup," but tororo, a marvelous seasonal delicacy, is a white potato that when grated raw and added to broth is incomparably subtle, satisfying, and nourishing. Â The sign outside the teahouse advertises this soup and other fare "sake sakana (sake and fish), which are on skewers seen in a holder at the back of the store. In addition to its gustatory reputation, the station at Mariko possessed literary distinction: it was immortalized by the poet Matsuo Basho: "Young leaves of plum / And at the Mariko way station / A broth of tororojiru."

Influenced by Basho's poem, Hiroshige incorporated the motif of plum, which he showed as blossoming, thus setting the season as early spring. Â To this mood he added another note of lyricism, that magical, liminal time before sunset, suggested by the peach-colored glow in the sky. Â The print extends to the viewer a powerful invitation to empathize with all of the characters in the scene, from the satisfied traveler resuming his journey, to the two hungry diners, to the rustic serving woman, a child on her back, who represents stability in the transitory world of the traveler.

Your current search criteria is: Objects is "Fifty-three Stations of the Tokaido: Station 21, Maruko".