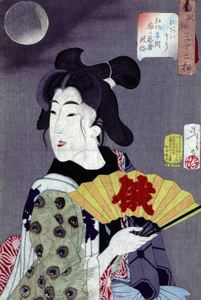 Dressed like an elegant young man, a young lady glances up at a male companion as if to ask, âDo I look alright?â She looks bright and charming in her unusual garmentsâas Yoshitoshi indicates in the title, they become her. It is early autumn, the season suggested by the full moon at top left, and this young geisha is taking part in the Niwaka celebrations, perhaps the most colorful of the many festivals held during the course of the year in the Yoshiwara. It featured special dances performed by courtesans and geisha dressed in men's and women's costumes. The fan that the girl carries reads niwaka and is a man'sâa woman's fan would have been decorated with a flower or a picture rather than a character. Her hair is arranged in a wakash?mage, young man's topknot. Utamaro designed a number of prints of the Niwaka festival. The girl's fashionable robe with its peacock-feather design probably belongs to her lover. The printing of the feathers was once enlivened by a silvery dusting, but the metal has oxidized and looks rather dirty. The cheaper metal pigments used on later editions of this print remain unoxidized, but the effect is garish. An extra tone of gray has been applied to a printing block and used to overprint the sky, giving the effect of a misty cloud in front of the moon. This cloud is missing from later impressions of the design. The word kuruwa in the title, which literally means enclosure, came to indicate a walled-off pleasure district, especially the Yoshiwara in Edo. The original function of a geisha, art person, was to entertain at courtesans' parties in the licensed quarters by singing and playing the shamisen, and a distinction was maintained between a kuruwa geisha, who entertained within pleasure quarters, and the more lowly machi geisha, town geisha, who worked outside. A distinction was also maintained between the primary sexual function of a courtesan and the functions of a geisha, although by the mid-nineteenth century the differences between courtesans and many lower-class geisha had become blurred.


Publisher
Tsunashima Kamekichi.
Keywords Click a term to view the records with the same keyword
This object has the following keywords:
1886-1890, Courtesans, Japanese Customs
Additional Images Click an image to view a larger version

Your current search criteria is: Objects is "Looking Suitable; A Brothel Geisha of the Koka Era (1844-1848)".