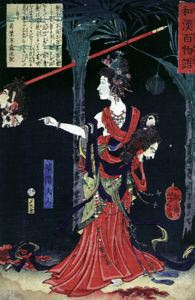 The beautiful but evil woman who ruined a nation by seducing its ruler away from his duties was a familiar subject during certain periods of Chinese and Japanese history. In the popular imagination, the downfall of the T'ang dynasty was caused by the infatuation of the last emperor, Hsuan Tsung, for his consort Yang Kueifei, and in Tokugawa Japan courtesans were called keisei (âcastle destroyersâ), an epithet the Sung poet Su T'ung-po had applied to Yang. In the nineteenth century, as Japanese men began to face a crisis of personal power, the image of the powerful and bewitching woman became increasingly common in popular literature and pictorial art.

âLady Kayo was a character in Ehon yofuden (The Story of the Magic Fox Woman), a fifteen-volume novel by Takai Ranzan with illustrations by Teisai Hokuba published between 1804 and 1805 and soon adapted for the Kabuki theater. The book describes the adventures, or misadventures, of a golden fox with nine tails whose various manifestations possessed the consorts of rulers in India, China, and Japan. In each kingdom, the fox caused havoc until it was recognized and exorcised or otherwise dispatched. In the novel, Lady Kayo was the consort of Prince Hanzoku, a ruler in southern India. She took ill, and a physician, suspecting her true nature, gave her a special herb, whereupon the fox assumed its true shape and flew into the air.

âYoshitoshi's Lady Kayo is far more menacing than the character in the novel, who murdered neither the prince nor his councillors. In the print, she is dressed in a vaguely European costume, and the three severed heads with their long curly hair appear to be Caucasian. By 1865 Yoshitoshi had already designed several overtly anti-foreign battle triptychs that obviously appealed to proponents of the imperial restoration, whose slogan was âRespect the emperor, expel the barbarian (Sonno joi). The text on the print is by Kikuyotei Roko.


Publisher
Daikin.
Keywords Click a term to view the records with the same keyword
This object has the following keywords:
1841-1868, Mythological Humans
Additional Images Click an image to view a larger version

Your current search criteria is: Objects is "Lady Kayo Holding a Severed Head".