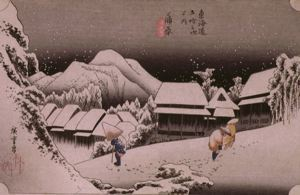 Edition
Second state.
Marks
On mat in pencil: exhibited Nov-Dec 1987 Clark Museum, Jo XVI 16, set #16. Signed: Hiroshige ga. Censor's seal: Kiwame.
Medium
Nishiki-e, horizontal oban; colored ink on paper.
Object Description
Color woodblock print from Hiroshige's Tokaido Road series. Kambara is the most acclaimed of Hiroshige's works; it is considered a world-class masterpiece. Hiroshige depicts a snowy night in a village sited on nearly flat land that lacks any distinguishing topographical features. Three travelers or villagers, two moving toward the right and one toward the left, laboriously walk with dragging feet. The hills, trees, and houses and heavily blanketed by the continuously falling snow. People in Hiroshige's time as well as later scholars have tried to locate, with no success, the place in Kambara that Hiroshige has depicted here. It has also been pointed out that in fact it seldom snows in Kambara.

The print is marked by fuku-bokashi printing, a technique by which the sky is darkest at the horizon line, and becomes gradually lighter as it ascends up into the sky. The effect of gradation was created by wiping color off the inked block. This may be a second edition, as there is another version of this prints exists, with subtle differences.

Your current search criteria is: Objects is "Fifty-three Stations of the Tokaido: Station 16, Kambara".