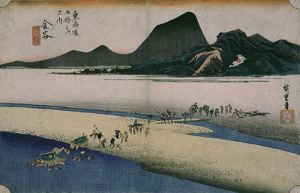 Bibliography
Singer, Robert T. and Melinda Takeuchi. Â Edo Â Art in Japan 1615-1868. Â New Haven and London: Â Yale University Press., 1998.
Marks
On mat in pencil: Jo XVI set 25, #358. Signed: Hiroshige ga. Censor's seal: Kiwame. Publisher's seal: Hoeido.
Medium
Nishiki-e, horizontal oban; colored ink on paper.
Object Description
The image, from Hiroshige's "Tokaido" series, depicts workers crossing the bank of the Oi River, which lies in the 2-mile distance between Shimada and Kanaya. The enormous volume of traffic during the Edo period produced what amounted to a virtual mobility industry, which included such workers as packhorsemen, bearers, ferrymen, and porters. Â And because the Tokugawa regime restricted the movement of potentially hostile armies by not building bridges over major rivers, this workforce was joined by a host of seminaked specialists in river fording. Â The lack of bridges was inconvenient to say the least; during the rainy season travelers could be stranded for almost a month waiting to cross. Â Shallow rivers could be traversed on foot without assistance, but deeper ones, like the Oi River pictured here, required other means. Â The price of carriage depended on the depth of the water and the mode of transport: palanquin, litter, or shoulders (the first two are pictured here).

Sometimes the price was renegotiated midstream, when the consumer had little say in the matter. Â In this print the palanquin bearers moving into the deep water to the left extend their right hands to synchronize their stride, while those at the extreme right negotiate with a group ready to cross. Â To emphasize the width of the riverbed, Hiroshige rendered the mountains in the background as being much taller than they are in reality.

Your current search criteria is: Objects is "Fifty-three Stations of the Tokaido: Station 25, Kanaya".