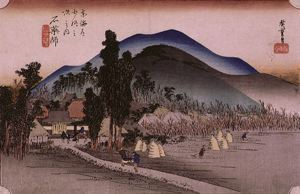 Commentary
Utagawa Hiroshige was most known for his landscapes in the ukiyo-e tradition. In 1832, he traveled with representatives from shogun to present a gift of horses to the emperor in Kyoto. They traveled along the Tokaido, which was the route between Edo and Kyoto. He desigend sketches throughout their journey and subsequently published one of his most famous print series, Fifty-three Stations of the Tokaido.

This image depicts travelers approaching Ishiyakushi-juku, the 45th station. It was named after the Ishiyakushi Temple, which housed a statue of Yakushi (the Healing Buddha). The bokashi technique is used to create an illusion of a sunrise in the brown sky. The early morning is quiet and few people are around. The travelers are carrying a package between them and their posture indicates that it has been a demanding journey. The imposing mountains in the background give a sense of calm and harmony between humans and nature. The sunrise and the presence of the Buddha suggest that it is the beginning of both spiritual and physical healing for the travelers after their journey.

Ishiyakushi and Shono, the next town, are the smallest of the Tokaido Road stations-Ishiyakushi has only fifteen inns, Shono ten. The town took its name from the Ishiyakushi Temple. According to the tradition of this temple, in 812 Kobo Daishi, founder of Shingon, an esoteric sect of Japanese Buddhism, carved the statue of Yakushi (Buddha of medicine) from a natural rock half-sunk in the earth. Since Kobo Daishi is the most famous priest in Japan, works of this sort are attributed to him all over the country. The origin of Ishiyakushi Temple's Buddha of medicine was most likely a fable, but the statue nevertheless attracted many worshipers from the neighboring area.
This print depicts this temple built near rice fields. Two worshipers, one on foot and the other on horseback, have just arrived before the gate. On a path between the fields, two men carry a package between them, slung on a pole-probably something for the temple.
Although the composition is unremarkable, the feeling of a lonely village is conveyed well; the tembokashi in purple, in the sky, and the blue bokashi of the mountain are beautiful.
(ref. âHokusai and Hiroshige,â p. 208 )
Publisher
Hoeido (Takenouchi Magohachi) seal.
Keywords Click a term to view the records with the same keyword
This object has the following keywords:
Hiroshige's Tokaido (c. 1833-1834), Tokaido Road, Japan
Portfolio List Click a portfolio name to view all the objects in that portfolio
This object is a member of the following portfolios:

Your current search criteria is: Objects is "Fifty-three Stations of the Tokaido: Station 45, Kambara".