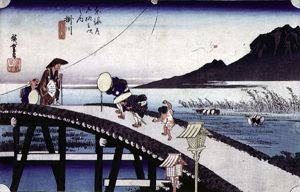 Commentary
Same image as 54.1.4.
Marks
No writing on piece or on piece's backing. On mat in pencil: Johnson collection XVII n. 28 set 27, Hiroshige, Kakegawa Station 27, Distant View of Akiba Mountain. Signed: Hiroshige ga. Censor's seal: Kiwame. Publisher's seal: Hoeido.
Medium
Nishiki-e, horizontal oban; colored ink on paper.
Object Description
Against the distant view of Mount Akiba, which rises at the east bank of the Tenryu River, a small human drama is taking place. An earthen bridge crosses the foreground diagonally. On it, an old couple bends low to pay homage to a priest coming from the opposite direction and accompanied by his boy-attendant. Behind the couple is a boy who has lost his kite, which is seen flying away toward the mountain. Someone behind the priest's attendant is flying another round kite that rises beyond the upper edge of the picture, suggesting its extreme altitude - a device that Hiroshige used in the composition of "Mount Fuji in the Morning from Hara." A row of farm women are working in the field at the right.

The unremarkable landscape is enlivened by an unusual group of people with exaggerated gestures. The blue tembokashi in the sky and the soft green bokashi in the field are skillfully done.

Your current search criteria is: Objects is "Fifty-three Stations of the Tokaido: Station 27, Kakegawa".