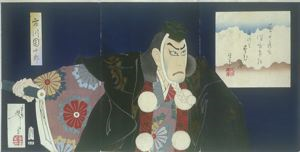 Commentary
Ichikawa Danjuro IX, as the character Benkei, holds a blank scroll but pretends to read a list of temple fund donors and their contributions. The artist Yoshitoshi has captured this dramatic moment when Benkei glares at a government official who has challenged the mountain monk / yamabushi to prove he is an itinerant Buddhist priest. The poem was written by Yoshitoshiâs friend Keika: âThe flowers and their fragrance like travelerâs robes are wet with dew / Hana mo ka mo tsuyukeki mono yo tabigoromo.â
Marks
On mat, in pencil: Marer 417. Seals: right panel - upper right half of image (in decorative box); left panel - upepr left and three in lower left. Signed: Oju Yoshitoshi ga. Artist's seal: Yoshitoshi no in. Carver: Hori Yu.
Medium
Colored ink woodblock on paper; oban; triptych.
Object Description
Edo period color woodblock print of the play "Kanjincho."

"After defeating the Taira clan, Minamoto no Yoshitsune returned to Kamakura to pledge fealty to his elder half-brother Yoritomo who had assumed control of the government. Yoritomo refused to trust his brother's sincerity and ordered Yoshitsune captured and his forces dispersed. Yoshitsune escaped by land and sea, traveling far westward and then doubling back along the coast of the Japan Sea in the hope of reaching Hiraizumi in northern Japan, where he felt he would be secure. His followers, including Benkei, disguised themselves as itinerant priests raising funds for a temple, and at the barrier of Ataka their identity was challenged. This episode is often performed on the Kabuki stage under the title The Subscription Record (Kanjincho), and the play was brought to its present form and popularity by Ichikawa Danjuro IX, the actor portrayed in Yoshitoshi's print. At the climax of the play, the suspicious warden at the government barrier requires the character Musashibo Benkei to read the subscription list in order to pass through a border checkpoint. The warrior-priest draws out an empty scroll and improvises a convincing series of donors and amounts; the warden finally accepts this as proof, allowing the group to pass safely onward. [This print demonstrates not only the climactic moment of the play, but also the infallible acting of Danjuro. The extension of his arm and turning away of his face from the empty scroll bring the scene to a point of almost unbearable tension which is only sufferable thanks to Danjuro's composure.] Benkei, dressed as the traveling priest, seems to be about to unroll his scroll. The seventeen-syllable poem at the right, written by Yoshitoshi's friend Keika, reads âThe flowers and their fragrance like traveler's robes are wet with dewâ (Hana mo ka mo tsuyukeki mono yo tabigoromo). The seal âHumanity: all thingsâ (Ningen banji) is the poet's motto. The Cole print is undated, but an impression in a Japanese collection seems to have the date April 1, 1887, stamped or printed beside the signature. If this date is correct, Yoshitoshi may have produced the design in anticipation of the first Kabuki play ever witnessed by an emperor, a performance of Kanjincho, with Danjuro in the lead role, presented in the mansion of the foreign minister Baron Ionoue on April 27, 1887. The 1887 date for the print is questionable, though, for the print is similar in style to Yoshitoshi's portrait of another friend which also has a poem by Keika, was engraved by Hori Yu, and was published by Akiyama in January 1890."
(Ref. Keyes, Roger, and George Kuwayama. "The Bizarre Imagery of Yoshitoshi: The Herbert R. Cole Collection," p.73)

"Ichikawa Danjuro IX, identified by his recognizable somber countenance, plays the role of an itinerant priest who is questioned by a government official at a barrier checkpoint. When asked to list the donors and monetary amounts contained in the scroll he clutches, Danjuro improvises a longwinded and convincing monologue that both buys time for his companionsâ escape and demonstrates his theatrical prowess. Some scholars have dated this print to 1887, speculating that âKanjinchoâ was quite possibly the first Kabuki play witnessed by an emperor."
(PL, student in 2010 seminar ARHI154 Japanese Prints)


Publisher
Akiyama Buemon.
Keywords Click a term to view the records with the same keyword
This object has the following keywords:
1886-1890, Actors and Actresses, Ichikawa Danjuro IX, Kabuki
Additional Images Click an image to view a larger version

Your current search criteria is: Objects is "Kanjincho, The Subscription List".