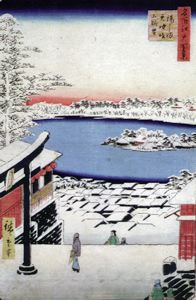 Bibliography
Smith II, Henry D. and Amy G. Poster. Â Hiroshige 1797-1858 Â One Hundred Famous Views of Edo. Â New York: Â George Braziller, Inc., 1986.
Commentary
In this snowy scene set in the capital, Hiroshige depicts a view from the entrance of the Yushima Tenjin Shrine, located close to Ueno Park. A major shrine dedicated to Tenjin, the kami of learning and scholarship, it was very popular during the Edo period and was visited by some of the countryâs most respected Confucian scholars. Like Michizane (the scholar who became the kami Tenjin), they had a deep knowledge of Chinese classical culture. As it is also close to the University of Tokyo, the shrine is visited regularly today by students hoping to pass university entrance exams in April.


Marks
On verso in pencil, lower right: Bai II 30. On mat in pencil: Hiroshige 100 Views of Edo #117 Yoshima, BAI II 30. Censor's seal: Aratame and date seal (Tatsu-shi).
Medium
Nishiki-e, vertical oban; colored ink on paper.
Object Description
Color woodblock print with a view of a lake in the distance, as seen from the Tenjin shrine, which sits on a hilltop.

This attractive view over Shinobazu Pond is very different from other snow scenes in the "Winter" group. Â All the others, as we have seen, are intricate compositions with careful detailing of falling snowflakes and accumulated snow, in which bent figures hidden beneath umbrellas move away from the foreground, adding an evocative tinge of melancholy.

Here, all is much more simple and straightforward. Â The snow has ended, the sky is clear and umbrellas are folded, the figures do not hesitate to show their faces, and the tone is more optimistic, with even a touch of festivity in the row of red lanterns on the teahouse to the left. Â In all these respects it is much closer to the one snow scene that does not appear in the "Winter" group, the view of Nihonbashi Bridge with which the series began. Â These were also the first two of the snow scenes to be published, and they reflect the generally conventional character of the twenty prints that are dated through 5/1856.

The view here is to the northeast from the precincts of Yushima Tenjin Shrine, which lies on a hill about forty feet above the pond. Â The main sanctuary of the shrine is off to the left, through the stone torii. Â This is a side approach to the shrine and could be reached by the two different stone stairways shown here, either the steep Male Slope (Otokozaka) to the lower right (so marked on the small pillar) or the gentler Female Slope (Onnazaka), by which the two figures in the center are ascending. Â This spot was famous for its commanding view to the north and east. Â Here we can see Benten Shrine in the middle of Shinobazu Pond, and beyond to the right on the heights of Ueno are some of the red temple buildings of Kan'ejii. Â Today, both stairways survive, but the view has been obstructed by multistory hotels.

Yushima Tenjin was one of the oldest shrines in Edo and was dedicated to Sugawara Michizane, the patron saint of learning and the arts. Â There is evidence of a Tenjin shrine here even before Ota Dokan built the first Edo Castle in 1456, but it was Dokan himself who rededicated the shrine in 1475, following a visitation by Michizane in a dream. Â Ever since, it has been devoutly patronized by rich and poor alike. Â Like many favorite shrines and temples, it served as a major center of recreation in Hiroshige's day, illustrated in this view by the red teahouses on either side. Â Today Yushima Tenjin is known for its spring plum blossoms and for its popularity - together with the city's other major Tenjin shrine at Kameido - among students praying to the patron saint of learning for success in school entrance examinations.
Publisher
Uoei (Uo-ya Eikichi) seal.
Keywords Click a term to view the records with the same keyword
This object has the following keywords:
1841-1868, Views of Edo, Japan
Portfolio List Click a portfolio name to view all the objects in that portfolio
This object is a member of the following portfolios: