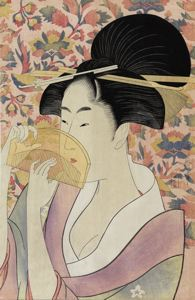 In Japan during the mid-17th century, images of beautiful women dominated genre painting, the precursor to woodblock print. Japanâs societal changes, which entailed the rise of townspeople, influenced artists and demanded a different depiction of life. After the development of print technology, these depictions of women, which were of high quality and boldly expressed their respective aesthetic ideals of female beauty, spread throughout Japan. Rather than using individual human models, Japansese print design used these aesthetic ideals of beauty as a reference.
While a quick glace at Edo prints seems to suggest that the Japanese valued women with ebony-bound hair, white powdered faces, and fine kimono, peering into the ukiyo-e world in closer detail indicates that the Japanese ideal of feminine beauty is far more complex. Prior to Kitagawa Utamaroâs time, the women of woodblock prints had already reflected a series of trends. Following Harunobu and Sukenobuâs ideal of a dainty and girl-like woman, Kiyonaga and Utamaroâs more substantial woman grew in popularity in the 1790s. Utamaro rediscovered the body and gained awareness of the combination of the physical and spiritual in composition. Rather than admiring women from a distance as past artists had done, Utamaro prefered to portray them close-up with his own intuitive grasp of female psychology.

Since Utamaroâs expertise lay in o-kubi-e (âlarge head pictureâ), âHair-Combâ showcases his understanding of the female. Because he lived in Edoâs Yoshiwara pleasure quarters with his publisher, Tsutaya, Utamaro had extensive access to the private lives of Yoshiwara courtesans. Such a resource explains why he specialized in close-up portrayals of courtesans performing everyday tasks. When on duty, the courtesans of the Edo period, the objects of desire for men and the pinup girls for women, were elegant and lavishly dressed. In contrast, the off-duty courtesan depicted wears minimal clothing and makes cleavage visible, which reflects Utamaroâs use of his resources as well as his patronsâ desire to see more of the womanâs body. Further appeasing Edoâs tastes for eroticized bodies, Utamaro frequently revealed the nape of the neck, considered an erogenous zone by the Japanese and elongated in this print. This elongation of the neck as well as the womenâs hardened face are characteristic of the substantial and elegant popularized and admired in prints at the time.
Enhancing the sensuality of the woman, Utamaro not only fetishized his women, but fetishized their surrounding elements. The womenâs tortoiseshell comb, which Utamaro masterfully gave transparency in his print, undergoes the same fetishized treatment. Just as the woman is an object of desire, the comb itself is also an object of desire associated with maintaining feminine beauty, characterizing the woman with a vein of vanity. Indicated by her gaze, the courtesan appears fixated with the comb. In return, the combâs transparency draws attention to the courtesanâs plump lips, deliberately colored a reddish-pink hue to further seduce the viewer. Because it also suggests that the woman is about to let her hair down, the comb in her hands also enhances the intimacy of the printâs environment. In addition, Utamaroâs fantastical, but unusual colored flora backdrop that complements the hues of the womanâs kimono, sets this print in a realm of fantasy, further marketing this courtesan as an object of desire.


Marks
On verso, in pencil: Adachi Repro. Utamoro Johnson V 40. On verso: seal in the lower left (Adachi reproduction seal). Signed: Utamaro hitsu.
Medium
Colored ink on paper; woodblock print.
Object Description
20th century reproduction of an Edo period color woodblock print with an image of a woman holding a hair comb.
Publisher
Omiya Gonkuro seal.
Keywords Click a term to view the records with the same keyword
This object has the following keywords:
1701-1800, Females, Reproduction
Portfolio List Click a portfolio name to view all the objects in that portfolio
This object is a member of the following portfolios:

Your current search criteria is: Objects is "Hair-Comb (Reproduction)".