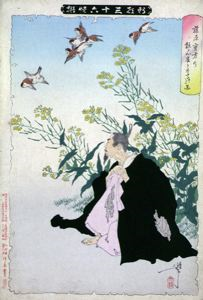 Commentary
Note: XV (p.48-49) of "Yoshitoshi's Thirty-six Ghosts." Sanekata viewing sparrows: Â The poet Fujiwara Sanekata was exiled to the north of Japan for having argued with the Imperial Court calligrapher. Â Sanekata longed for the capital, and his thoughts turned to sparrows that flew to the Imperial Palace to report his distress. Â According to one story, the birds ate the Emperor's rice for revenge.
Marks
On mat, in pencil: Marer 447. Description on verso of mat. Artist's seal: Taiso. Signed: Yoshitoshi. Carver: Enkatsu to. Engraver: Â Enkatsu. Printed: Â 10 April 1890.
Medium
Colored ink woodblock on paper; oban.
Object Description
Meiji period Japanese color woodblock print with an image of a man, sitting on the ground, watching birds fly above him.