One Hundred Aspects of the Moon: No. 72, Mount Miyaji moon - Moronaga 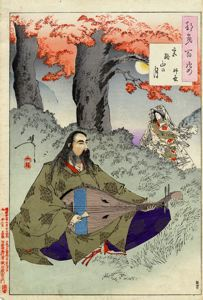 Commentary
See 93.3.48
Marks
On mat, in pencil: Marer 80. Artist's seal: Taiso. Signed: Yoshitoshi. Carver: Enkatsu to.
Medium
Colored ink woodblock on paper; oban.
Object Description
Fujiwara no Moronaga (1137-1192) and his father were exiled from Kyoto for having supported Emperor Go-shirakawa in his political struggles with ex-Emperor Sutoku. Â While travelling through Shikoku, he visited Mt. Miyaji at the peak of Autumn Colors and was moved to play his lute in response to the natural beauty surrounding him. An anonymous lady passes by, charmed by his music,

"The draftsmanship is intentionally loose: the lines of the drawing seem to vibrate with the notes of the biwa. Moronaga's hair, hanging freely in recognition of his exile, is as ragged as the autumn leaves on the branches. The grasses and bushes are drawn scratchily, in a style found in the quick sketches that Yoshitoshi drew before his more careful preparatory drawings.

The print conveys the idyllic peace of the mountains and the power of music."


Publisher
Akiyama Buemon.
Keywords Click a term to view the records with the same keyword
This object has the following keywords:
1886-1890, Music and Dancing, Musicians
Additional Images Click an image to view a larger version

Your current search criteria is: Objects is "One Hundred Aspects of the Moon: No. 72, Mount Miyaji moon - Moronaga".