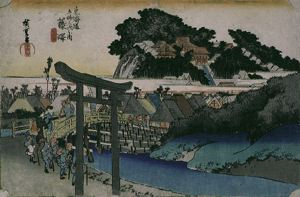 Fujisawa was famous for two religious attractions: Yugyouji and the gate of the shrine of Benten in Enoshima. Yugyoji,seen in the grove on the hill, upper right, was a temple established by the priest Donkai (1265-1327), fourth abbot after Ippen (1239-1285), who established the Jishu sect in 1325. This temple was continually popular, attracting many pilgrims who traveled there on the Tokaido road. The large torii in the foreground is the first gat leading back to the Benten Shrine on nearby Enoshima island.
Benten, also called Benzaiten, a deity deriving from the Brahamism of India, was reserved as the patron of eloquence and learning, and worshipped as the goddess of love and giver of wealth. Her shrines are usually built on islands. Such as Enoshima, in this print, or on Chikibushima and Itsukishima. Her cult goes back to ancient times but became very popular in the Edo period; She was one of the Seven Gods of Good Luck (Shichi fukijin).
In order to show two attractions at the same time, Hiroshige uses a semicircular composition that leads the viewer's eye clockwise. The road that goes through the torii leads across an arched bridge and then goes to the right and connects to a street lined with stores and houses. It is not clear how Yugoji is accessible from this street. A group of blind pilgrims approaches the torii. Two urban women woman are beginning to climb up the arch of the bridge and will soon pass two men coming from the opposite direction.
(ref. âHokusai and Hiroshige,â p.169 )

Your current search criteria is: Objects is "Fifty-three Stations of the Tokaido: Station 7, Fujisawa".