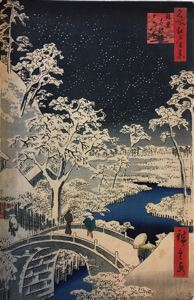 Commentary
Drum Bridge, a rare arched stone bridge in Meguro, led to RyÅ«senji, a popular Buddhist temple. The military government built RyÅ«sen Temple to honor the wrathful Buddhist deity, FudÅ-myÅÅ, and ensure the protection of the regime and the capital. Hiroshigeâs snowy scene exudes peace and tranquility, with a gently darkened sky suggesting twilight, and the white of the paper left deliberately uncolored to convey a landscape blanketed in snowy silence. As with many of his scenes of Edo, he portrays this corner of the city with great skill and emotion. Judging by the number of prints in this series, he enjoyed rendering his hometown of Edo so much that he could not stop at 100!

A subtle touch is added by the gray roof hidden in the lower right behind Hiroshige's signature. Â This would be known to his audience as the Shogatsuya, a teahouse beside the bridge that was famous for its shiruko mochi, a sweet bean-paste soup. Â Shogatsu means "new year," a hidden hint of the coming of spring that is echoed in the corner of green bokashi on the title cartouche.
Publisher
Uoei (Uo-ya Eikichi).
Keywords Click a term to view the records with the same keyword
This object has the following keywords:
1841-1868, Views of Edo, Japan
Portfolio List Click a portfolio name to view all the objects in that portfolio
This object is a member of the following portfolios:

Your current search criteria is: Objects is "Drum Bridge and 'Setting-Sun Hill' in Meguro".