One Hundred Aspects of the Moon: No. 30, Moon through a crumbling window 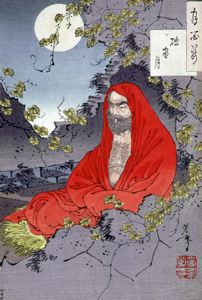 Commentary
Bodhidharma in meditation: Â The first patriarch of Zen Buddhism was an Indian monk who travelled to China in the fifth century and sought to reform the Chinese monasteries by his example of sitting in meditation for nine years, staring at a cave wall. Â Reportedly the wall eventually dissolved, but Bodhidharma did not break his concentration.
Marks
On mat, in pencil: Marer 329. Artist's seal: Yoshitoshi no in. Description on verso of mat. Signed: Yoshitoshi. Carver: Yamamoto to.
Medium
Colored ink woodblock on paper; oban.
Object Description
Meiji period Japanese color woodblock print with an image of Bodhidharma, known in Japan as Daruma, absorbed in meditation. The Indian prince, shown here with curly hair and beard and robed in orange, traveled to China, where he introduced Chan (Zen) Buddhism. Daruma meditated in front of a wall for nine years; as the years passed, the wall crumbled and vines grew in between the cracks.
Publisher
Akiyama Buemon.
Keywords Click a term to view the records with the same keyword
This object has the following keywords:
1886-1890, Monks and Nuns
Additional Images Click an image to view a larger version

Your current search criteria is: Objects is "One Hundred Aspects of the Moon: No. 30, Moon through a crumbling window".