One Hundred Aspects of the Moon: No. 10, Chikako, the filial daughter 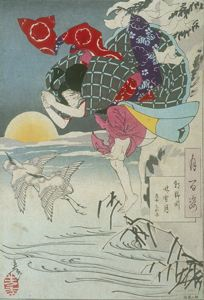 "The design is one of the best in the series. The composition is tight, with an over-sized moon holding the components together. Horizontal lines of blue and gray clouds draw the eye towards the moon and give a sense of distance. Chikako's brightly colored robes fill the top fo the picture and give it substance, while the lower portion is empty except for the water, leaving nothing to support her.

Chikako's tissues flutter down behind her, and two egrets flap away - one can almost hear the sound of their wings breaking the silence. Their movements accentuate the stillness of the frozen landscape and emphasize the young girl's loneliness."


Publisher
Akiyama Buemon.
Keywords Click a term to view the records with the same keyword
This object has the following keywords:
1886-1890, Death
Additional Images Click an image to view a larger version

Your current search criteria is: Objects is "One Hundred Aspects of the Moon: No. 10, Chikako, the filial daughter".