New Forms of Thirty-six Ghosts: A Good Woman's Spirit Praying in the Waterfall 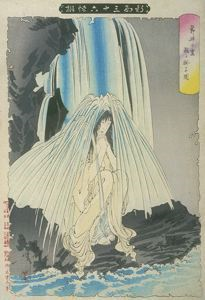 Commentary
Otsuji praying for Munechika's safety: Â The nurse of Tamiya Munechika was upset when her charge was sent off to a mountain temple, where he would be killed to prevent his avenging his father's death. Â Otsuji did extreme austerities to enhance her prayers, and although she died, Munechika lived to kill his father's murderer.
Marks
On mat, in pencil: exhib. 11/93. Signed: Yoshitoshi.
Medium
Colored ink woodblock on paper.
Object Description
Meiji period Japanese color woodblock print with an image of a woman sitting in the base of a waterfall, praying as the water falls around her.

Tamiya Gempachiro, a fencing master from the Ikoma clan in Sanuki Province, was put to death in 1624 by a rival. His wife was pregnant and after his death bore a child named Botaro, whose only thought in his youth was to avenge his father's death. He realized his goal in 1641 and committed suicide himself immediately afterward as the law required. In Kabuki versions of the story, Botaro's enemy arranged to have him exiled to a remote temple while still a child and schemed to have him killed there. His loyal nurse, Otsuji, aware of the danger to the child but powerless to intervene, kept a vigil and offered prayers to the god Kompira, finally killing herself with the prayer that the child be spared and her life accepted in exchange. Her prayer was answered, and the day she died young Botaro was released from captivity.

Several artists designed woodblock prints of the devoted nurse praying in the waterfall. A half-length portrait by Kunichika published in the early Meiji period even shows her cutting her throat to commit suicide. Yoshitoshi's print seems to be based on the left panel of the diptych by Kunisada published in 1885.


Publisher
Sasaki Toyokichi
Keywords Click a term to view the records with the same keyword
This object has the following keywords:
1891-1912, Females
Additional Images Click an image to view a larger version

Your current search criteria is: Objects is "New Forms of Thirty-six Ghosts: A Good Woman's Spirit Praying in the Waterfall".