One Hundred Aspects of the Moon: No. 93, Buddhist Monk Receives Cassia Seeds 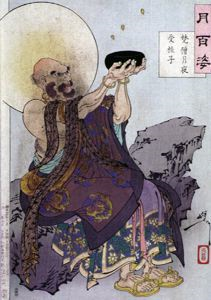 
Publisher
Akiyama Buemon.
Keywords Click a term to view the records with the same keyword
This object has the following keywords:
1891-1912, Church Officials, Monks and Nuns
Additional Images Click an image to view a larger version

Your current search criteria is: Objects is "One Hundred Aspects of the Moon: No. 93, Buddhist Monk Receives Cassia Seeds".