One Hundred Aspects of the Moon: No. 93, Buddhist monk receives cassia seeds 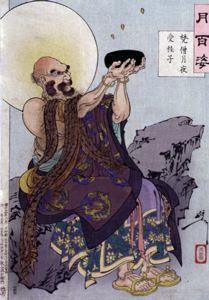 Commentary
A monk collecting cassia seeds: Â According to Chinese legend, eight Cassia tress grow on the moon and are responsible for the perpetual renewal of its form. Â Seeds falling from the moon are though to grant immortality and magical powers. Â Yoshitoshi used brass filings to color the monk's scarf, but these have discolored.
Marks
On mat, in pencil: Marer 391. Artist's seal: Taiso. Description on verso of mat. Signed: Yoshitoshi. Carver: Yamamoto to.
Medium
Colored ink woodblock on paper; oban.
Object Description
Meiji period Japanese color woodblock print with an image of a Buddhist monk holding up a bowl to catch falling cassia seeds.


Publisher
Akiyama Buemon.
Keywords Click a term to view the records with the same keyword
This object has the following keywords:
1891-1912, Monks and Nuns
Additional Images Click an image to view a larger version

Your current search criteria is: Objects is "One Hundred Aspects of the Moon: No. 93, Buddhist monk receives cassia seeds".