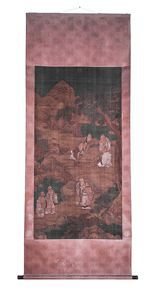 
Medium
Grey, blue, and pink toned paint brushed onto silk, with a red-brown silk brocade border and rosewood end knobs.
Object Description
Mounted vertical scroll, with five scholars playing a game of Chinese chess in the central plane, and two pairs of scholars on a walkway in the lower central area and in the lower left. Set outdoors, within a hilly landscape.
Keywords Click a term to view the records with the same keyword
This object has the following keywords:
Festivals and Games, Paintings, Scholars
Additional Images Click an image to view a larger version