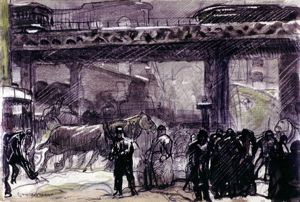 Medium
Pencil, colored pencil, and ink on paper.
Object Description
Drawing of a crowded street scene, in thick expressionistic line. In black and white with mustard brown accent. "Street Scene" is typical of Bellows best drawings in the artist's use of a large variety of materials within a single work to achieve pictorial completeness. Although there are touches of colored crayon, color is completely subordinated to achieve a linear conception. The drawing is directly related to one of the few watercolors Bellows ever made, "Under the Elevated." Both show the same horse and leader clearing the show, bypassers at the right, a boat docked in the background, and the elevated overhead. In the drawing, however, falling snow is indicated by thin, white crayon lines.

Street Scene is typical of George Bellowsâ most successful drawings in the artistâs use of a variety of materials within a single work to achieve pictorial harmony.
Bellows was born and raised in Columbus, Ohio. In 1904 he moved to New York City. He studied under Robert Henri, the foremost figure and leader of the Ashcan School. This group consisted of a number of American realist painters of the early 20th century who sought to depict the contemporary American scene in all its forms.
In 1913 he became a full member of the National Academy and in the same year helped organize the famous Armory Exhibition, which was aimed at introducing modern European art to the American audience. Through this exhibition, artists and the public alike became acquainted with radical movements such as Fauvism and Cubism, which set the foundation for the modern American art movements that soon followed.


Keywords Click a term to view the records with the same keyword
This object has the following keywords:
Drawings and Pastels, Street Scene
Portfolio List Click a portfolio name to view all the objects in that portfolio
This object is a member of the following portfolios:

Your current search criteria is: Objects is "Street Scene".