Arhat Pindola on a Tiger 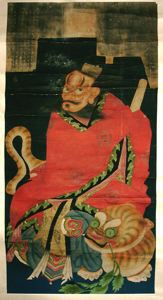 Marks
There is a large square red ink seal in the upper center of the painting.
Medium
Multicolored paints on paper, with a white silk brocade border. Painting over a rubbing.
Object Description
Vertical hanging scroll with a lohan (Arhat Pindola) with huge facial features, sitting upon an oddly-styled tiger. Black background and calligraphy (rubbings) above.

âArhat Pindola on a Tigerâ is an ink rubbing that has been painted. The inscription at the top states that the original image was done in China during the 4th century, but the rubbing is much later. The vivid coloring and painting style suggests that a Korean or Manchurian artist was involved; we might speculate that an ink rubbing done in China was brought back by a pilgrim and then reworked for display in a Buddhist temple.


Keywords Click a term to view the records with the same keyword
This object has the following keywords:
Immortals, Screens and Scrolls
Portfolio List Click a portfolio name to view all the objects in that portfolio
This object is a member of the following portfolios:

Your current search criteria is: Objects is "Arhat Pindola on a Tiger".