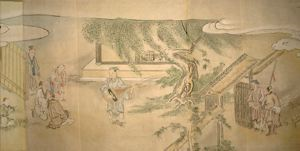 Marks
Written on the exterior: 25.00 Teikwan Deeds of Chinese Emperors. A strip of paper with writing is also afixed to the exterior. Beginning from the right, text is written on the second, forth, fifth, sixth, eight, ninth, and tenth scenes, in the upper right corner of each.
Medium
Ink and paint on paper. The exterior of the scroll is covered in royal blue silk brocade.
Object Description
Long, horizontal scroll with ten scenes of deed of Emperors. The first two scenes are depicting the Emperor in everyday life. The third scene shows a group of men watching workers, and the forth shows a group watching a musician. The fifth is an interior court scene with a dancing girl. The sixth scene shows hunting near a stream. The seventh shows the Emperor praying at a shrine. A man glancing at the clouds stands with a group in front of some carriages. The eigth scene is of the Emperor travelling in a coach. The ninth scene is of the Emperor arriving in town, greeted by women with bamboo branches. The last scene shows three boats at a rocky shore, transporting trees from the land.
Keywords Click a term to view the records with the same keyword
This object has the following keywords:
Royalty and Rulers, Screens and Scrolls

Your current search criteria is: Objects is "Teekwan Deeds of Chinese Emperors".