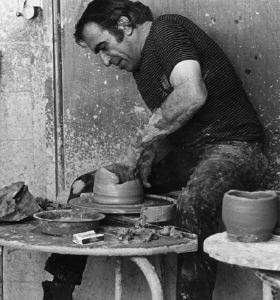 Peter Voulkos
Contemporary Ceramist
American, (1924–2002)
The third of five children born to Greek immigrant parents in Bozeman, Montana, Peter Voulkos could not afford a college education and anticipated a career constructing floor molds for engine castings at a foundry in Portland, Oregon, where he went to work in 1942 after high school. But in 1943 he was drafted into the U.S. Army Air Corps and was stationed in the central Pacific as an airplane armorer and gunner. After the war, the G.I. Bill offered him a college education, so he studied painting at Montana State College, now Montana State University, and took ceramics courses during his junior year, graduating in 1951. Voulkos had a natural aptitude for clay and soon was winning awards, including top honors at the 1950 National Ceramic Exhibition at the Syracuse Museum of Fine Arts, in New York. Encouraged, he chose ceramics as a course of study in graduate school at the California College of Arts and Crafts in Oakland, from which he graduated with a master's degree in 1952. Around the same time, he married Margaret Cone and had a daughter, Pier. His work also was gaining attention, and he was invited to teach at the experimental Black Mountain College in Asheville, N.C., in 1953. Once again, timing was in his favor, as other artists on hand included John Cage, Merce Cunningham and David Tudor, with whom he later stayed in New York, where he met Abstract Expressionist painters Franz Kline, Jack Tworkov, Philip Guston and Robert Rauschenberg. That fall, he returned to Helena, and was resigned to selling his ceramics to make a living until the fateful call came from Sheets. "I was just a hick from Montana, so coming to L.A was a big thing for me," Voulkos remembers. "When I got that job, it was my big break. I didn't have to do dinner plates anymore. I got paid for teaching and didn't have to worry about selling. Being able to teach helped expand my vocabulary. I learned from my students. Ceramics in those days was quite boring," he says. "Scandinavian design. I fell for them for a while, but it was short-lived. It didn't move fast enough for me." But soon Voulkos gained a supporter, sculptor David Smith, known for his balanced cubes of steel . Voulkos shared a studio on Glendale Boulevard with his former student John Mason (his neighbor was architect Richard Neutra), and in the evenings, he and his students, who were also his friends, would listen to jazz at the Tiffany Club. âL.A. Conceptual artist John Baldessari recalls that Voulkos, who at that time was painting in an Abstract Expressionist style as well as building massive abstract clay sculptures, seemed the very embodiment of the advanced New York art world. Baldessari, who was studying painting, remembers, âI soon discovered that he was more of an inspiration and a goad than any of my painting instructors, who were relatively academic. He psychically gave me permission, because the teachers I had always seemed delimiting.â â Just before Christmas 1958, Voulkos opened a solo show at the Pasadena Art Museum (now the Norton Simon Museum). Soon after, he was fired from L.A. County Art Institute and hired by UC Berkeley, where his students included Ron Nagle, James Melchert and Ann Adair, who later became his second wife and by whom he has a son, Aris. Voulkos' career continued to escalate with a 1960 show at the Museum of Modern Art in New York, favorably reviewed by Dore Ashton in the New York Times. Yearning to work on a larger scale than is possible in clay, he began producing monumental bronze sculptures for corporate clients, such as an 18-foot-tall sculpture in the lobby of the San Francisco office of Tishman Realty. Despite this two-decade foray into bronze, Voulkos remained committed to pushing the boundaries of possibility in ceramics. From 1979 to 1984, he concentrated on firing plates and then the vessel-shaped "stacks" in an anagama, a Japanese wood-burning kiln. Inspired by the Haniwa figures and Momoyama period ceramics of Japan, Voulkos let the ash and soot from the firing process in the kiln decorate the irregular surface of the clay. "There was a certain kind of casualness about some of the Japanese ceramics that I liked. There can be a big crack in the pot caused by the kiln, and the piece becomes a national treasure," he says. The 1980s brought about a serious personal challenge, however. By mid-decade, he was forced to confront his addiction to cocaine and enter a rehabilitation facility. In 1989, he returned to his ceramic sculpture with a sense of renewed purpose and a more incisive and controlled sense of composition. During the '90s, he has regained the confidence in the process. After he retired from UC Berkeley, Voulkos still acted as teacher, spending about four months of each year on the road doing seminars. Peter Voulkos died of heart failure while preparing for a workshop in Bowling Green, Ohio, February 2002.

Your current search criteria is: Artist is "Peter Voulkos".