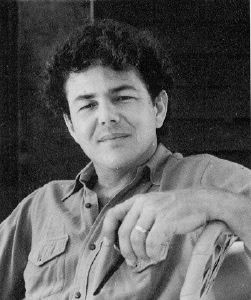 Steven Horn
Contemporary Ceramist
American, b. 1949
Born at La Port, Indiana, on December 28, 1949, ceramic artist Steve Horn studied at the California State University, Fullerton, California, with Stokesberry, Suez, and Rothman. He earned B.A., M.A., and M.F.A. degrees in fine arts and related technologies. While at Fullerton, Horn became affiliated with a significant movement of California ceramic artists associated with celebrated ceramist Jerry Rothman (American, Contemporary), "who emerged from the breakthrough days at Otis and eccentric large-scale ceramic sculpture and his individual approach to the container form." (Dale Ruff, Artweek, January 19, 1980). A dynamic and influential teacher, Rothman influenced a diversified group of talented undergraduates and graduate students. He was one of the "Fullerton Gang" who moved into prominence during the 1970's. Like all of the ceramists who studied with pioneers like Peter Voulkos at Otis Art Institute or Paul Soldner at Scripps College or Rothman at Fullerton, Horn was not limited in his approach to conventional methods and ideas about ceramics. "Ceramists are usually strict disciplinarians - due to the rigid traditional laws, the drying and firing cycles involved in making clay objects. This (Fullerton) group accepts the medium's restrictions as a challenge - which they meet head on. No limitations are accepted. Imagination, laced with exploration, is their hallmark." (--Betje Howell, Los Angeles Herald Examiner, 1975). Over time, his vigorous earlier works gave way to a mature style which synthesized ideas drawn from a variety of historical and contemporary sources such as decoration from antiquity and the figurative abstraction of Matisse and Picasso; sumi e-ink painting of Japan; material usage from the Italian Arte Povera movement and California "Process Art". His sources have also included Pre-Columbian art, art of antiquity, Pop-art, Funk art and popular culture. Based on reviews, a qualified sampling sales records and other selective criteria, Horn has, sometime in the past 36 month period, crossed over a professional threshold into a higher level of historical and artistic significance. Commensurate with this success, the value of his objects have risen. He is represented by Claremont Arts, at http://www.claremontarts.com

Your current search criteria is: Artist is "Steven Horn".