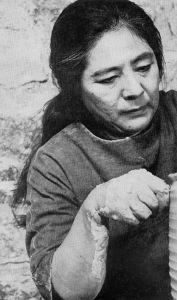 Toshiko Takaezu
Contemporary Ceramist
Hawaiian, b. 1929
Toshiko Takaezu was born in Pepeekeo, Hawaii. Â She studied ceramics and weaving at the Honolulu School of Art and ceramics at Cranbrook Academy of Art under Maija Grotell. Â She has taught at Cranbrook, the University of Michigan, the University of Wisconsin, and the Cleveland Institute of Art. Â She gave up teaching in 1968 to concentrate on studio work.

Takaezu's work has been influenced by Zen Buddhism, nature (particularly landscapes), Abstract Expressionism, and by her native Hawaii, where there is a blend of East and West. Â She unites form, design, texture, and color in her pieces, and all these elements work together to compose the whole. Â Her works range from small, closed forms containing a pebble for a rattle-like effect, to "tree" forms, tall structures which seem to fit naturally into the surrounding landscape.

Takaezu is interested in sound and ceramics, placing pebbles of clay in her closed-form pots and chalices before firing. Â Her use of color is influenced by abstract expressionist painting. She currently practices and resides in Quakertown, New Jersey. Takaezu was formerly the head of the ceramics department at the Cleveland Institute, and also taught at Princeton University from 1966 until she retired. She maintains a studio in Quakertown, New Jersey.

Your current search criteria is: Artist is "Toshiko Takaezu".