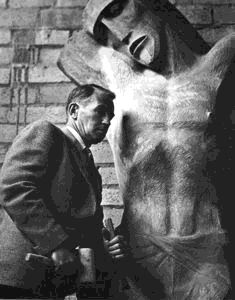 Albert Stewart
20th century Modern Sculptor, painter
American, (1900–1965)
Albert Stewart was born in Kensington, England to a theatrical family. He was raised by his grandparents after his mother's death during his birth. He came to the United States at age seven with his grandfather. He displayed an early interest in animals and a talent for sketching. After attending several schools and serving in the RAF in World War II he returned to New York and worked for the "Herald Tribune" as staff cartoonist. He studied art formally at the Beaux Arts Institute of Design and the Arts Students League in New York. In the 1920s and 30s he experienced early success and earned several commissions for monumental sculptures, with architectural and animal themes. He was hired by Scripps College, and taught humanities and sculpture there from 1939 to 1965. Stewart was also a WPA artist, and worked on panels for the Home Owners Loan Corporation Building in Washington, D.C. Stewart was known for his absolute dedication to anatomical correctness, his simplification of form, and his stylized and elongated natural forms.

Your current search criteria is: Artist is "Albert Stewart".