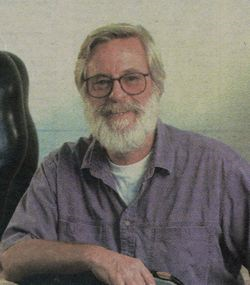 Kenneth Price
Contemporary Ceramist
American, b. 2/16/35
Price studied at many institutions: Chouinard Art Institute (1953-1954), the University of Southern California (B.F.A., 1956), the Otis Art Institute (1957-1958), the New York State College of Ceramics, Alfred University, Alfred, New York (M.F.A., 1959). He taught at the University of California, Irvine, and at the Chouinard Art Institute. He was a central figure of the California clay revolution of the 1950's, and used clay to express the principles of Abstract Expressionism. His work in the 1950 was marked by an unbridled machismo - being called "big, aggressive, and earthy." His later pieces however moved to small discreet works infused with elegance, sensuality and wit. He is a gifted colorist, printmaker and draftsman. He is known for his misshapen cups with lyrical glazes that parody cheap, border town pottery; his geometric forms that serve as an armature for jagged planes of primary color; and his weird hybrids combining industrial and organic shapes and ominous eggs with maggot forms pushing through fissures in their shell. Ken Price moved to Taos, New Mexico in the mid-1970's and worked in clay and produced silkscreen prints, in conjunction with Gemini Gel.

Your current search criteria is: Artist is "Kenneth Price".