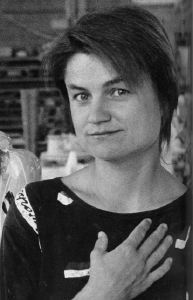 Anne Scott Plummer
Contemporary Ceramist
American, b. 1951
Anne Scott Plummer was born in Providence, Rhode Island to an artistic family. Her parents had both attended the Rhode Island School of Design and worked in the arts. Anne, after a brief stint as an air traffic controller in the Air Force, moved to Provincetown on Cape Cod and painted and made pots to earn her living. After a few years of this work she enrolled in college, and earned her B. A. in 1979 from the Rhode Island School of Design. She then left for California, where she studied at Claremont Graduate University with Paul Soldner, earning her M. F. A. in 1980. She studied in France in 1985. Her work tends to address some of the dilemmas of human existence through the use of the figure, with the emphasis on process.

Your current search criteria is: Artist is "Anne Scott Plummer".