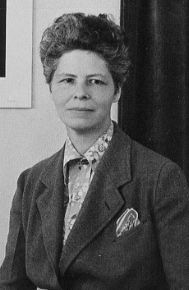 Lilian May Miller
20th century Japanese Printmaker
American, (1895–1943)
Of all the Western artists who lived in Japan, Lilian Miller was the only one born there. Miller was the daughter of Lily Murray who was a Christian missionary and wife of Ransford Miller, a career diplomat who represented U.S. interests in Tokyo and Soeul. In 1904, at the age of nine, Lilian began her formal training in Japanese art by studying traditional painting under Kano Tomonobu (1843-1912), who was the 9th generation head of the Kano School in Hamacho, Tokyo. She was probably introduced to Tomonobu by Helen Hyde. Lilian continued studying painting, and later printmaking, with Tomonobu, until her father accepted a position with the State Department in 1909.

Miller attended Vassar College in the U.S., and shortly thereafter returned to Soeul, Korea, where her father was now the Consul General. In 1918 she returned to Japan, and began studying ink painting with Shimada Bokusen (1867-1941). In 1920 she used sketches made in Korea to create the large ink painting "In a Korean Garden", which showed at the Imperial Salon (Teiten) of the Imperial Academy of Fine Arts, where it won an award of Special Merit (Tokusenjo). As one of five artists so honored in a competition of 500 participants, she considered this award as proof of her acceptance by the Japanese as an authentic "Japanese artist."

She began designing woodblock prints the same year, creating images of the Korean people and countryside, which she sold in Tokyo and the U.S. By 1922, she is said to have produced more than 6,000 prints and holiday cards, working with carver Matsumoto and printer Nishimura. Around the samt time Miller began work on "Grass Blades from a Cinnamon Garden," a self illustrated book of poetry. Many poems are declarations or mediations of love for the Orient. Unfortunately, while she was visiting her parents in Seoul, the Tokyo Earthquake of 1923 destroyed her house, prints, books and woodblocks.

For several years Lilian Miller was in poor health and stayed with her parents. By 1928 she had recovered and produced a variety of woodblock prints to sell on a trip to the U.S. in 1929-30. Most of the prints depict scenes from Korea, using typically Japanese techniques. She was now carving hew own blocks and running her prints herself. This allowed her to experiment with different colorings, as illustrated in the series of images of Mt. Fuji. While touring the U.S. she gave woodblock printing demonstrations at galleries and museums in Boston, New York City, Philadelphia, Washington, Chicago, Kansas City, Denver, San Francisco, and Pasadena. During this trip she also met Grace Nicholson, who dealt in oriental antiquities. This friendship enabled Miller to meet and make use of many important art contacts on her 1929 American trip. She had many exhibitions and was frequently profiled in the newspaper. Miller was admired for doing the entire process of woodblock printing herself including block cutting and printing.

During the Depression, Miller evolved to a new style of watercolor that sold well. They were made with a flat japanese brush with japanese pigments and paper, and strongly influenced by Yoshida Hiroshi and Kawase Hasui, two leading Japanese shinhanga artists. Internationalism marked Miller's life and art in the early 1930's. As a respected member of the American expatriate community with native knowledge of Japan, she was much in demand socially.

In 1935, Miller had surgery for a large cancerous tumor including a hysterectomy. In 1936, after Japanese radical officers assassinated several leading politicians, Miller and her mother (her father had passed away) moved to Honolulu. Miller no longer had the strength for printmaking, and returned to watercolors, usually working outdoors. She spent her final years traveling in the U.S. to promote her print sales and to visit friends. Another relocation to San Francisco may been due to larger access to commercial markets. The massive redwoods and cedars also reminded her of growing up in Nikko.

The attack on Pearl Harbor mobilized Miller to store her brushes and find a way that her knowledge of Japan and Japanese could be of service to her country. She signed on with a Naval counter propaganda branch as a Japanese Censor and Research Analyst. In 1942 another cancerous tumor was discovered. Lilian Miller died in 1943 at age 47.

Miller's knowledge of Japanese and its art world, her connections to the diplomatic community and her freedom in Japan from American traditional expectations of marriage and motherhood all contributed to her artistic success.

Moonrise Over an Ancient Gateway, Korea 44.1.15

Your current search criteria is: Artist is "Lilian May Miller".