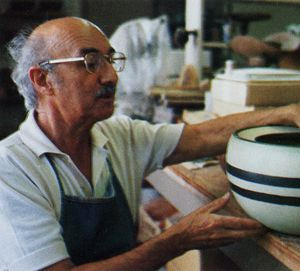 Harrison McIntosh
Modern Ceramist
American, b. 1914
Harrison McIntosh was born in 1914 in Vallejo, California. He studied Art Center School in Pasadena (1938), the University of Southern California (1940-1942), and Claremont Graduate School (1949-1952). He taught for one year at the Otis Art Institute, in 1954. McIntosh has worked as a professional studio potter in Claremont since the mid-1950s, supplementing his studio sales with designs of ceramic and glass wares for such large factories as the Japanese company Mikasa. McIntoshâs work has been exhibited in museums throughout North America, including the Renwick Gallery of the National Museum of American Art, Washington, D.C.; the Museum of Fine Arts, Boston; and the Los Angeles County Museum of Art. His work is also represented in museum collections in Europe and Japan and such American museum collections as the American Craft Museum, New York; and the Oakland Museum, California.

Your current search criteria is: Artist is "Harrison McIntosh".