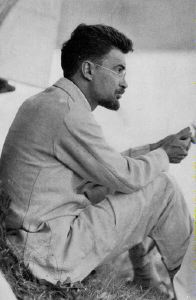 Henry Lee McFee
20th century Painter
American, (1886–1953)
Henry McFee was born in St. Louis, Missouri in 1886, and received his first training in art there at the School of Fine Arts. He later studied at the Stevenson Art School in Pittsburgh in 1907, and at the Art Students' League in 1908. In 1910 he settled in Woodstock, New York. His early works revealed a cubist influence, but he is primarily known for his later works of still lifes, in a flat 2-dimensional style, inspired by CÃ©zanne. After teaching briefly in San Antonio, Texas, and Savannah, Georgia, McFee and his second wife settled in California. He first taught summer school at the Claremont Graduate School, and then taught at Chouinard in Los Angeles. Following a Guggenheim grant in 1940, he joined the Scripps faculty in 1943, where he remained until his death in 1953.
"Art at Scripps, the Early Years" exhibition catalog, Scripps College, Claremont, Ca, 1988.

Sunflowers in a Vase MC20

View From The Window MC8

Your current search criteria is: Artist is "Henry Lee McFee".