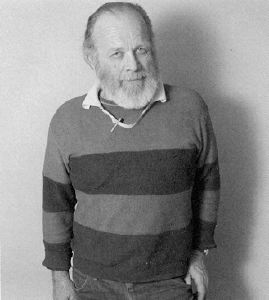 Malcolm McClain
Contemporary Ceramist
American, b. 1923
Malcolm McClain was born in 1923 in Los Angeles, California. He received his B. A. at Pomona College in 1956 before attending the graduate program at Otis Art Institute from 1956-57, where he studied with Peter Voulkos. He also studied painting and sculpture in France, New York City, and Mexico. His involvement with ceramics is strongly intellectual, dealing with carefully conceived compositions of form and showing a constructivist tendency. In the 1960's Malcolm McClain began writing poetry and art criticism under the pen name of Mac McCloud, in addition to teaching ceramics. He taught sculpture and drawing at Pomona College and the Claremont Graduate School in 1964, ceramics at the University of California, Berkeley in 1965, poetry and the history of sculpture from 1976-1981 at the Otis Art Institute, and sculpture and ceramics from 1965 to 1988 at California State University in Los Angeles.

Your current search criteria is: Artist is "Malcolm McClain".