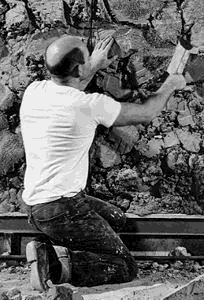 John Mason
Contemporary Ceramist
American, b. 1927-2019
John Mason was born in Madrid, Nebraska on March 30, 1927. He studied at the Otis Art Institute in Los Angeles from 1949-1952, and at the Chouinard Art Institute in Los Angeles from 1953-54. He taught at Pomona College, in Claremont from 1960 to 1967. He has received several ceramics commissions in California. Mason was Associate Professor of Art at the University of California, Irvine from 1967-73, and Professor from 1973-74. He also taught studio art at Hunter college in New York from 1974-85. He later returned to Los Angeles, spending his final decades in the city that had been the site of the revolution in clay he helped foment, along with Peter Voulkos, Paul Soldner and others. They took clay and used it to create sculptural works of immense power.

Your current search criteria is: Artist is "John Mason".