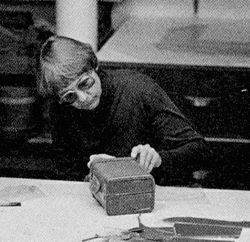 Marilyn Levine
20th century Contemporary Ceramist
American, (1935–2005)
Marilyn Levine was born in 1935 in Alberta, Canada. She received her B. S. at the University of Alberta in Edmonton in 1957, her M. S. in Chemistry at the same institution in 1959, her M. A. at the University of California, Berkeley in 1970, and her M. F. A. at Berkeley in 1971. After receiving her two degrees in chemistry, Levine moved to Regina, Saskatchewan where she studied ceramics. During a trip in 1968 she visited innovators of the West Coast ceramics movement, which prompted her to begin questioning clay's functionalism. After receiving her M.F.A. in ceramics she settled in Oakland, California. The functionalism of Levine's objects is due in large part to her expertise in techniques. Her details fool the eye: trompe l'oeil style translates her leather bags, jackets and suitcases into stoneware, and plays effectively with the notion of time. He object show extremely personal traces of the object's owner. Levine has taught ceramics in both Canada and the United States.

Your current search criteria is: Artist is "Marilyn Levine".